Difference between revisions of "Automation: how to change all users's individual signatures"

- This article is a Work in Progress, and may be unfinished or missing sections.

The purpose of this article is to show how to create a simple script which, can modify every user's signature globally, based on their ldap attribute values in ldap.

To accomplish that task we will use two scripts. In the process I will explain why combining the two scripts into one will not work.

set the default path to zmprov.
sets the zimbraPrefMailSignatureEnabled attribute to TRUE.
sets a variable called signature.
assigns to this variable different attribute values, that are assign to that user in LDAP. In this example: (^cn|^ou|^company|^street|^telephoneNumber|^mobile|^title). The attributes can be changed as per the admin needs.
the last line modifies the account, as it writes the values from LDAP to the signature of the user.

Scroll down to the section "Why two scripts?", to find out how to run the scripts.

Where are these values in AdminUI 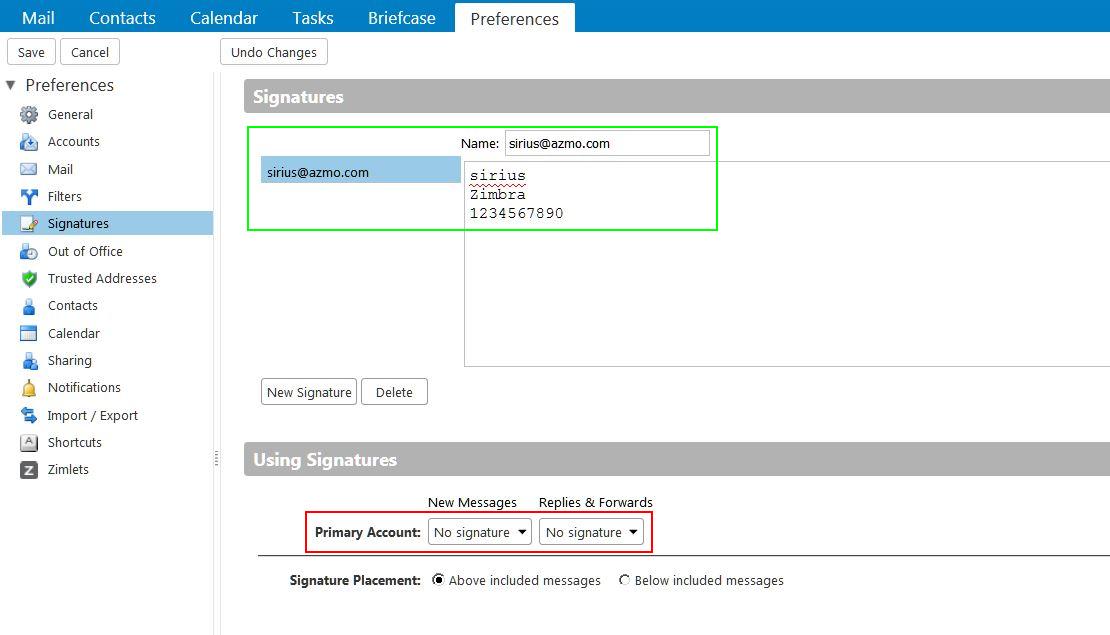 It is important to know that even if we run the first script and the values for the signature are entered, the signature will not be active unless we modify the values in the red rectangle. When changing that in the WebUI is easy and intuitive. However, when dealing with the script, this might be overlooked.

There are two scripts because if we combine the two into one, the commands of the second script will not be implemented. The second script's main purpose is finding out the value of zimbraSignatureId attribute and assign it to other two attrs. However, even when changing the signature, this attribute will not be assigned a value for the signature ID. The only way to get this value is when the user logs in into his account. Then, we can take the value of this attribute and assign it to the other two attributes. Logging showing the issue:

The + signatureid= output is only visible for the first user, because user 9@azmo.com logged in, after issuing the first script. For the second user, this is not set, and thus the next two attributes get a value of null, thus putting this commands in one script will not do all the job.

What can we do?

After running the first script, sending a global mail for the users to reload or logout/login. Then running the second script, or they might as well change this setting (in the red rectangle) themselves.